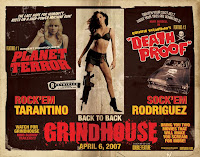 A friend of mine from college recently sent me a link to an AfterEllen.com article about the movie Bitch Slap coming out in December 2008. She asked me for my thoughts and here they are…

I think I might be the wrong person to ask.

Reason being I love gratuitous sex and violence in movies, within reason of course. I loved Robert Rodriguez and Quentin Tarantino’s Grindhouse movies. A woman with a gun for a leg killing military created zombies – count me in! Sexy ladies exacting revenge on a psychopathic-misogynistic-vehicular-homicide-loving Kurt Russell – more please! I loved these films so much that after returning them to Netflix I promptly ran out and purchased them, and then made all my friends watch the films with me repeatedly.

I know what you’re thinking that I’m a horrible queer feminist of color, right? Well, I’m going to have to respectfully disagree. And here’s why…

While I hate the way that closet racist and annoying hipster elitist try to use satire to reinforce their supposed superiority and avoid being called bigoted while doing it, I think satire when it’s done right, or at least when it’s read in a critical way, can be extremely subversive. Smart satire can often effectively challenge concepts of power, race, sex, and gender among other things.

There’s a famous example of effective satire that is brought up in Charles Ramirez Berg’s Latino Images in Film: Stereotypes, Subversion, Resistance, known as “stereotypical reversal.” Stereotypical reversal occurs when a movie plays on and invalidates a well-known stereotype by making the viewer confront their own prejudice and bias. The example that Ramirez Berg uses is from the film Flying Down to Rio, when Roger and Belinha are stranded on an island and a bare-chested black man emerges from the surrounding bushes and confronts the couple. Audiences are trained to expect a danger scenario given the location and the fact that the man is black, the viewer might wonder if this “native” is going to kidnap them or harm them in some other way. When the man steps away from the bush it becomes visible that the man is wearing golf slack and shoes, carrying a set of clubs, and when he opens his mouth has a British accent. Turns out they landed in Haiti right next to a country club and the gentleman was looking for a lost ball in the brush when they stumbled upon him. Everyone is made aware of their ignorance and as a result the stereotype is deconstructed.

Satire by its very nature is something that disarms you, most often through comedy or ridicule, and makes you take a hard look at yourself and your fears and biases. The ultimate purpose of satire is to bring about improvement by bringing ones flaws to the surface. So how do B-movies and neo-exploitation films bring about improvement? Well, often they don’t, or at least they don’t at first glance. We’re trained to be passive viewers, but if you’re willing to do the work as a viewer and think critically you’ll see that even the most seemly inane of movies like Death Proof are a comment on systems of power and hierarchy in American culture.

I think a really good recent example is Harold and Kumar. Although on the surface it's your basic stoner buddy comedy, if you scratch below the surface its actually a very intelligent commentary on masculinity, race, sexuality, and leisure time in American culture. That is not to say that the film doesn't have its problems, but I think there are moments in the film that are very smart and valuable

While, I can’t conclusively say whether Bitch Slap is a clever neo-exploitation or just stupid and offensive since it hasn’t come out yet, I’ll leave you with what the Co-writers and directors Eric Gruendemann and Rick Jacobson to say. They call Bitch Slap a “feminist, thinking-man's” exploitation film with a mysterious female narrator who “comments periodically on the folly of humanity, the plight of the human condition and the vagaries of life and love through quoting the likes of Dostoevsky, T.S. Eliot, Sun Tzu and even Buddha.”


Check out the trailer and AfterEllen.com article for yourself and let me know what you think.

Posted by Marisol LeBron at 3:29 AM

Hey Marisol, thanks for humoring me in so much depth. I'm going to have to disagree with you on one point -- I think you were absolutely the right person to ask.

I think any production like this that hopes to subvert a mainstream genre while simultaneously attempting to capture a mainstream audience runs the risk of missing one or both of those marks. That being said, I’m grateful that there’s SOMEONE out there making a “feminist, thinking man’s” ANYTHING. The possibility that product might be consumed by a wide audience… I find that intriguing.

I like what you’ve said here about satire, and I think you make some really powerful points. I wonder if the people who go to this movie expecting a straight exploitation film will leave disappointed or satisfied. I’m also curious how comfortable they’ll feel sharing the theaters with that feminist/queer niche market.

I’m certainly willing to pay my eight bucks to find out.

Thanks for the support!

Please feel free to cross post it at Racialicious.

Hi there, I read Racialicious all the time and I have just realized that I've been reading a ton of articles by a grad of Oberlin - that's awesome, by the way.
I also saw the trailer on AfterEllen.com and was really conflicted about it. I think that your article really highlights a lot of my own feelings on the subject. It's hard to process without actually seeing the film, but - needless to say - there's a lot going on. I am planning on seeing it now - just to see what category it falls under.
Thanks for writing.