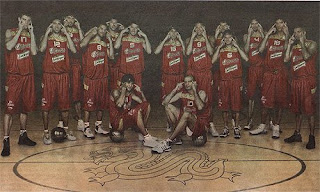 Spain's Basketball Federation released this "good luck" advertisement which depicted the team in their Olympic uniforms pulling at their eyelids in a slant-eyed gesture. Although only photos of the men's basketball team have surfaced the women's basketball team also took similar photos.

The Olympics has always put forth a rhetoric of world unity and understanding as the reason for its existence (rather than acknowledging that it is little more than a global commercial event and sports competition). The Beijing Olympics, and particularly the conduct of the Spanish Basketball Federation, have exposed the hypocrisy of the "Olympic ideal".

Spanish sports have been marred by racist antics like this for the past few years. In November 2004 black English soccer players were subjected to racial slurs and monkey noises during a match in Spain. Before the World Cup Spain's former soccer coach called player Thierry Henry a "black shit." Last year racer Lewis Hamilton was also subjected to racial slurs during the qualifiers for the Barcelona grand prix.

I wonder whether the Spanish Basketball Federations behavior and the continued racist incidents will make the Olympic committee realize that maybe Madrid isn't the best place to host the 2016 games.

Source: The Guardian via/RaceWire
Posted by Marisol LeBron at 9:32 PM