Judd Apatow and the Art of White Masculinity 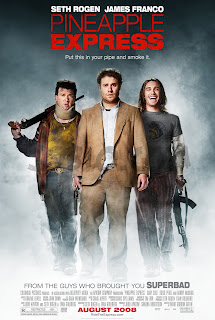 “That shit is SO fuckin’ homo”
So I finally saw Pineapple Express this weekend and throughout the whole movie the men around me were constantly expressing how “fucking gay” the movie was. I left there thinking about the two very different displays of masculinity I had just witnessed in the movie theater. The men in the audience, who were mostly young men of color in their late-teens/early-twenties, were attempting to (re)affirm their masculinity through homophobic and sexist comments in response to the perceived lack of masculinity they saw on the screen. On the screen however the cast of Pineapple Express (most of whom are white men with the exception of Craig Robinson) were celebrating their homosocial (but not homosexual) affection for each other and their outsider status as members of the informal economy. I thought about the ways that homosociality functions not only in Pineapple Express but in Judd Apatow movies generally as a comment on the state of contemporary white masculinity in American society.

For those of you who might not know who Judd Apatow is, he’s the writer and/or producer of many of the successful “Frat Pack” movies including: Pineapple Express, Step Brothers, Forgetting Sarah Marshall, Walk Hard: The Dewey Cox Story, Superbad, Knocked Up, Talladega Nights, The 40 Year Old Virgin, and Anchorman. He’s was also the Executive Producer of the cult TV show Freaks and Geeks on NBC. 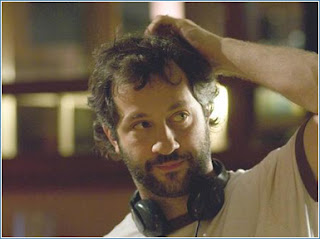 Critics and audiences alike have wondered whether the characters in Apatow’s films, especially Superbad, might be gay. In Superbad, Seth is so obsessed with dicks that he used to compulsively draw them as a kid and talks about them non-stop throughout the entire film. Towards the end of the film Evan and Seth share a "tender moment" where they exchange “I love you’s” and Evan says he wants to go scream from the rooftops that he loves Seth. Those “tender moments” have become a staple in Apatow’s films and Pineapple Express is no exception. At one point in Pineapple Express Danny McBride’s character tells James Franco’s characters that he’s happy they’re best friends and continues by saying “I want to be inside you.”

I don’t think Apatow’s films say anything about sexuality that is specifically homosexual or homophobic, but I do think his films rely on homosociality to demonstrate the ways in which white masculinity has been “wounded” by the feminist, gay, and civil rights movements. In Apatow’s movies we see an entire generation of white men who rely on each other for a sense of validation and understanding, a generation of men who in many ways by refusing to grow-up are able to avoid facing the reality of changing power structures in American society.

In a New York Times article on Apatow Jon Kasdan, who also worked on Freaks and Geeks, said:

“The culture in the last 5, 10 years is one of shame and humiliation, and Judd gets that. Part of the experience of being a man in this postmodern life is humiliation, and wearing it as something to be proud of. This is a true frustration that Judd is expressing in his work, almost a romanticized version of being a schlub.”

What is interesting is that in Apatow movies arrested development is presented as the solution to dealing with the frustration of being a “schlub.” People of color, women and gays (particularly white gay men) have more visibility, if not power, in contemporary society – the question that Apatow’s character are trying to work out is “where does this leave me?” While Apatow’s films don’t directly say it, they certainly show us that white masculinity ain’t what it used to be for the groups of white male friends that the stories center on. Apatow’s characters exist in a universe that is almost completely male and almost completely white, their existence in this world of their own making is like an attempt to recreate the “old boys clubs” of their father’s and grandfather’s generations.

Think of AMC’s critically acclaimed TV show Mad Men, I think it is no coincidence that a show that literally portrays that “old boys club” has generated so much attention and ratings. In Mad Men and Pineapple Express you see the trajectory of white masculinity, Mad Men presents us with the cracks beginning to show in white masculinity’s façade, while Judd Apatow’s movies ask “How the fuck did we end up here … but since we’re here lets get high and play Guitar Hero.”
Posted by Marisol LeBron at 10:44 PM

Marisol, this is a really interesting post. Is Pineapple Express worth seeing?

I would definitely recommend it. I thought it was interesting for the reasons above, but besides that it was actually pretty funny. You should check it out and let me know what you think.

Yo!
This movie was so hilarious!